Combining the art of DIY with home decor. 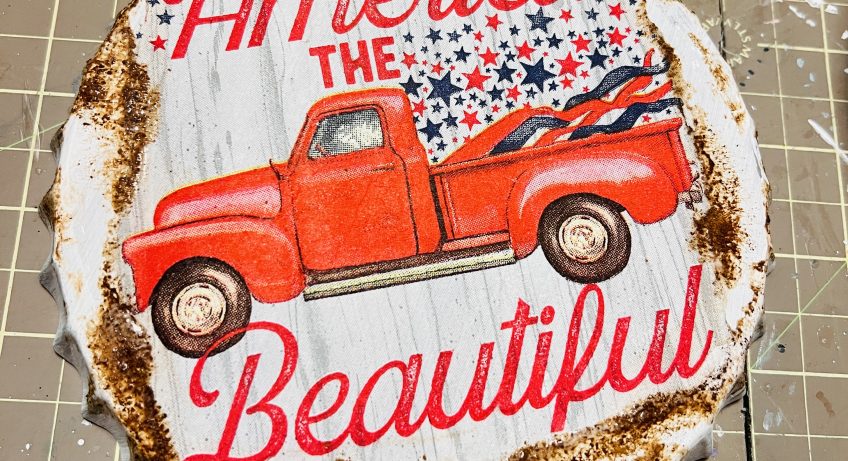 By now I’m sure you’ve seen the Dollar Tree bottle caps. I actually ordered them online so I have had several on hand for a while, just waiting for the perfect project! I decided on a Dollar Tree bottle cap patriotic sign that I think will be perfect, and just in time for one of my favorite holidays, July 4th!!

For this project I’ll be using the Dollar Tree bottle cap of course, and a festive and patriotic napkin I picked up at Home Goods!! I’ll also be using one of my favorite techniques to give the project an aged, Americana vibe!!

So the first thing I’ll do is paint the top and sides of the bottle cap with white Waverly chalk paint. Allow the paint to dry and add a coat of Mod Podge, allowing it to dry as well. I’m also going to go ahead and remove the rope hanger for now. I’ll add it back when I’m finished with the project.

While the Mod Podge is drying, go ahead and cut a section from the napkin. This napkin has a truck that I’ll just cut around. Separate the plys, using only the top ply for this project.

When I’m ready to apply the napkin I’ll just lay it on top of the dry Modge Podge, centering it where I’d like it. Next I’ll lay parchment paper on top and then just iron it on.

Now comes the fun part, adding some “rust” and making this project look aged. I’m envisioning the truck with some rust too!! Love “rusting” your projects? Here’s another favorite of mine!! This technique is pretty simple, it combines Mod Podge and cinnamon. I’ll dip the paint brush in Mod Podge and apply it where I’d like, then dip in cinnamon and put that on top of the Modge Podge. I’ll repeat this process until I have the look I want.

As you can see above I added “rust” around the napkin edges, and on the edges and sides of the bottle cap. You can add as much or little as you desire. I’ll also add some to the truck!!

Eek!! See the “rust” spots on the truck?? Those are my favorite!! I’m going to add some small wood stars to the bottom, but this step could be skipped. I’ll glue them on and then paint white to make them pop!!

Now that it’s all finished I’ll display it on a wreath. I love the pop of color against the green! You could use this piece in a tiered tray or any vignette! A very simple project brought to live with a little “rust” aging!! What do you think?